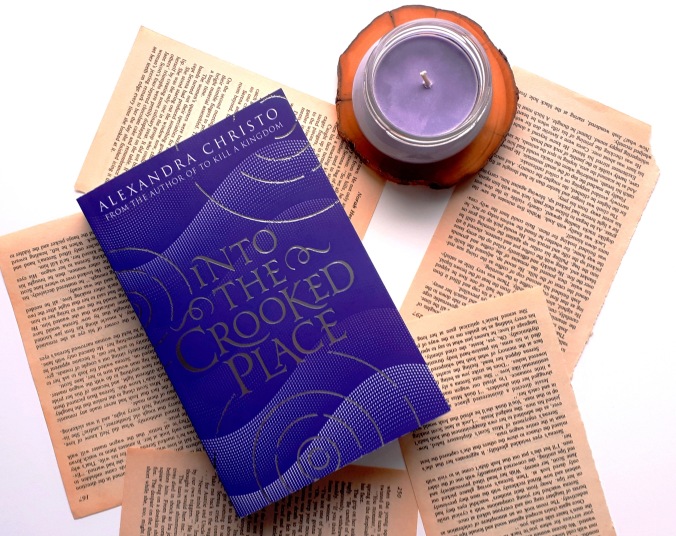 Into the Crooked Place begins a gritty two-book YA fantasy series from Alexandra Christo, the author of To Kill a Kingdom.

The streets of Creije are for the deadly and the dreamers, and four crooks in particular know just how much magic they need up their sleeve to survive.

Tavia, a busker ready to pack up her dark-magic wares and turn her back on Creije for good. She’ll do anything to put her crimes behind her.

Wesley, the closest thing Creije has to a gangster. After growing up on streets hungry enough to swallow the weak whole, he won’t stop until he has brought the entire realm to kneel before him.

Karam, a warrior who spends her days watching over the city’s worst criminals and her nights in the fighting rings, making a deadly name for herself.

And Saxony, a resistance fighter hiding from the very people who destroyed her family, and willing to do whatever it takes to get her revenge.

Everything in their lives is going to plan, until Tavia makes a crucial mistake: she delivers a vial of dark magic—a weapon she didn’t know she had—to someone she cares about, sparking the greatest conflict in decades. Now these four magical outsiders must come together to save their home and the world, before it’s too late. But with enemies at all sides, they can trust nobody. Least of all each other.

A deliciously darker take on YA fantasy? Don’t mind if I do! The central premise of this book is that the best people to save the realms from moral peril is…a bunch of criminals. I’m used to the common trope of heroes on a quest to save the kingdom, but substituting a bickering group of crooks in their place creates a refreshing and entertaining new dynamic!

END_OF_DOCUMENT_TOKEN_TO_BE_REPLACED 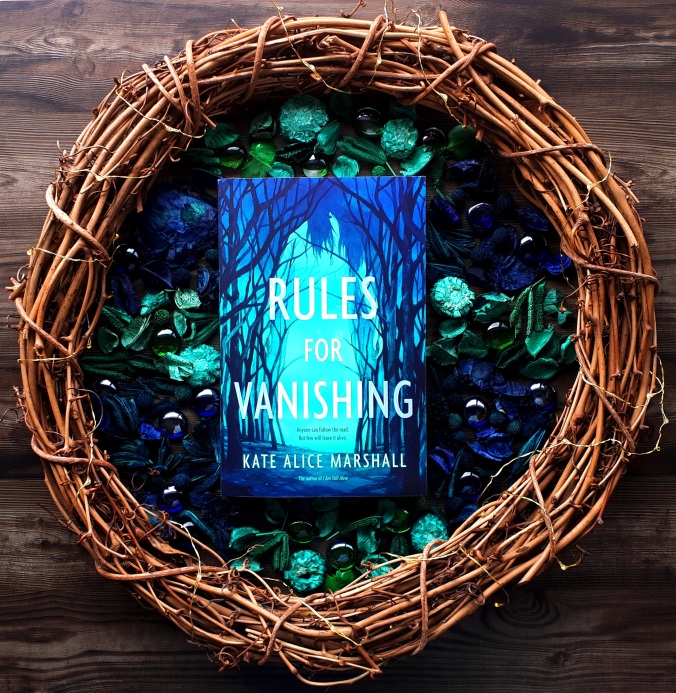 In the faux-documentary style of The Blair Witch Project comes the campfire story of a missing girl, a vengeful ghost, and the girl who is determined to find her sister–at all costs.

Once a year, the path appears in the forest and Lucy Gallows beckons. Who is brave enough to find her–and who won’t make it out of the woods?

It’s been exactly one year since Sara’s sister, Becca, disappeared, and high school life has far from settled back to normal. With her sister gone, Sara doesn’t know whether her former friends no longer like her…or are scared of her, and the days of eating alone at lunch have started to blend together. When a mysterious text message invites Sara and her estranged friends to “play the game” and find local ghost legend Lucy Gallows, Sara is sure this is the only way to find Becca–before she’s lost forever. And even though she’s hardly spoken with them for a year, Sara finds herself deep in the darkness of the forest, her friends–and their cameras–following her down the path. Together, they will have to draw on all of their strengths to survive. The road is rarely forgiving, and no one will be the same on the other side.

This is a tremendously creepy and atmospheric read perfectly timed for your October TBR so you can delight in its thrills & chills in the lead-up to Halloween! Or you can race ahead like I did and read it earlier, because it really is too good to hold off on. 😉

END_OF_DOCUMENT_TOKEN_TO_BE_REPLACED 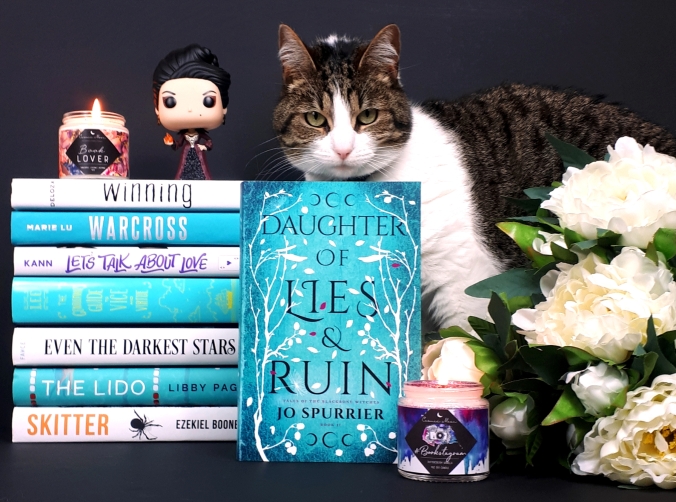 Why do the worst people sometimes make the best family? From the author of Winter Be My Shield and A Curse of Ash & Embers comes the next absorbing Blackbone Witches novel.

‘If they didn’t want to get turned into beasts and used to fuel a ritual, they shouldn’t have attacked a witch. That’s all there is to it.’

There’s something strange brewing in this tinder-dry forest – a girl with a sword and a secret, a troupe of vicious bandits vanished without a trace, beasts that don’t belong and a witch with a macabre plan.

Elodie hasn’t been learning witchcraft for long, but she knows enough to be worried, and the fact that her mentor Aleida wants to pack up and leave in short order isn’t helping to settle her nerves.

Elodie just hopes to get everyone out of this mess unharmed, but it’s looking more unlikely with every passing hour. And when the strange witch’s ire falls on her, Aleida’s wrath sparks a fire that threatens to scorch the earth itself …

This is book 2 in the ‘Tale of the Blackbone Witches‘ series (my review for book 1 is here) and my excitement could not be contained when I got my hands on an early copy of ‘Daughter of Lies & Ruin‘. We find out what comes next for our protagonist, Dee, who is an apprentice to the sardonic, morally grey badass witch Aleida and learning how to wield her own nascent magical abilities.

END_OF_DOCUMENT_TOKEN_TO_BE_REPLACED

Gothic, intoxicating, feminist, darkly provoking and deeply romantic – this is the breathtakingly imagined untold story of the brides of Dracula, by bestselling author Kiran Millwood Hargrave in her much-anticipated YA debut.

They say the thirst of blood is like a madness – they must sate it. Even with their own kin.

On the eve of her divining, the day she’ll discover her fate, seventeen-year-old Lil and her twin sister Kizzy are captured and enslaved by the cruel Boyar Valcar, taken far away from their beloved traveller community.

Forced to work in the harsh and unwelcoming castle kitchens, Lil is comforted when she meets Mira, a fellow slave who she feels drawn to in a way she doesn’t understand. But she also learns about the Dragon, a mysterious and terrifying figure of myth and legend who takes girls as gifts.

They may not have had their divining day, but the girls will still discover their fate…

The first thing that drew me to this book was the absolutely stunning cover. And in this case you should ABSOLUTELY judge the book by its cover because the story within is beautiful, lushly drawn and will inextricably twine around your heart.

END_OF_DOCUMENT_TOKEN_TO_BE_REPLACED

Bound as one to love, honor, or burn.

Two years ago, Louise le Blanc fled her coven and took shelter in the city of Cesarine, forsaking all magic and living off whatever she could steal. There, witches like Lou are hunted. They are feared. And they are burned.

Sworn to the Church as a Chasseur, Reid Diggory has lived his life by one principle: thou shalt not suffer a witch to live. His path was never meant to cross with Lou’s, but a wicked stunt forces them into an impossible union—holy matrimony.

The war between witches and Church is an ancient one, and Lou’s most dangerous enemies bring a fate worse than fire. Unable to ignore her growing feelings, yet powerless to change what she is, a choice must be made.

And love makes fools of us all.

This was one of my most highly anticipated reads of the year and I’m so glad to report that it blew my socks off as hoped! Serpent & Dove combines two of my favorite tropes: enemies-to-lovers and forced-marriage, which meant my expectations were sky high, but kudos to Shelby Mahurin, she became an instant fave author with this spectacular debut novel. ❤

END_OF_DOCUMENT_TOKEN_TO_BE_REPLACED 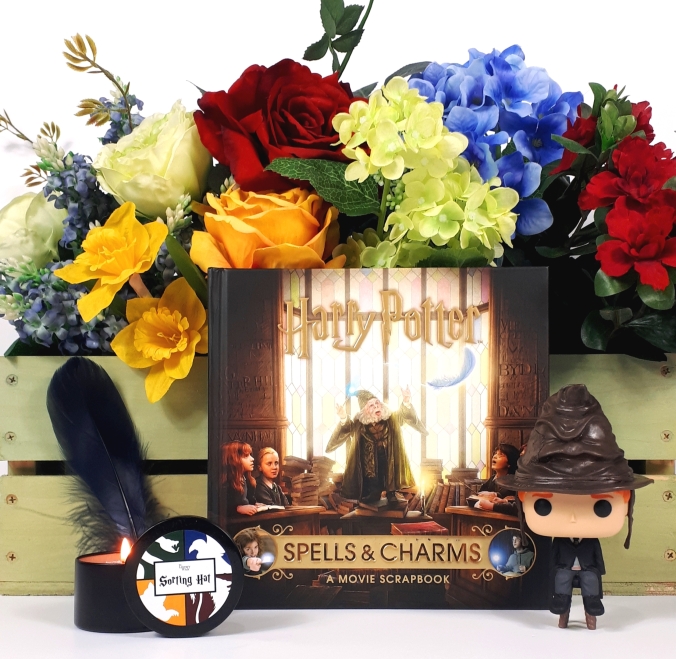 Packed with inserts, concept illustrations, and behind-the-scenes photography, Harry Potter: Spells and Charms: A Movie Scrapbook is a guide to the spells and incantations of the Harry Potter films.

This magical movie scrapbook takes readers on a behind-the-scenes tour of iconic spells and charms—from Expelliarmus to the Patronus Charm, and even the three Unforgivable Curses. Detailed profiles include concept illustrations, set photography, and fascinating reflections from the actors and filmmakers about bringing different spells and charms to the big screen. Fans can also relive key scenes in the films when these spells are utilized, including Professor Flitwick’s first Charms class, the first task of the Triwizard Tournament when Harry summons his broom with the Accio spell, and the attack at the Great Lake where Harry uses Expecto Patronum against a swarm of Dementors. Filled with a wealth of bonus inserts, Harry Potter: Spells and Charms: A Movie Scrapbook is a must-have collectible for all Harry Potter fans.

I love the idea of this interactive scrapbook which not only provides a thorough magical education on all the spells performed in and out of Hogwarts, but is also jam-packed with fun trivia, sneak peeks behind the scenes with the cast & crew and gorgeous artwork.

END_OF_DOCUMENT_TOKEN_TO_BE_REPLACED

Kamai was warned never to open the black door, but she didn’t listen …

Everyone has a soul. Some are beautiful gardens, others are frightening dungeons. Soulwalkers―like Kamai and her mother―can journey into other people’s souls while they sleep.

But no matter where Kamai visits, she sees the black door. It follows her into every soul, and her mother has told her to never, ever open it.

When Kamai touches the door, it is warm and beating, like it has a pulse. When she puts her ear to it, she hears her own name whispered from the other side. And when tragedy strikes, Kamai does the unthinkable: she opens the door.

A.M. Strickland’s imaginative dark fantasy features court intrigue and romance, a main character coming to terms with her asexuality, and twists and turns as a seductive mystery unfolds that endangers not just Kamai’s own soul, but the entire kingdom …

Do you like dark fantasy? Did you watch Labyrinth and wish that the Goblin King would romantically sweep you around a ballroom? Are you one of the Phantom of the Opera fans that think Christine made a mistake and should’ve chosen Erik? Fascinated by the myth of Hades and Persephone? Well, here’s the perfect book for you!

END_OF_DOCUMENT_TOKEN_TO_BE_REPLACED

One moment, Emmie is writing her high school history paper; the next, she’s sitting with a gorgeous 16th century king who vacillates from kissing her to ordering her execution.

Able to travel back to her own time, but intensely drawn to King Nick and the mysterious death of his sister, Emmie finds herself solving the murder of a young princess and unraveling court secrets while trying to keep her head on her shoulders, literally.

With everything to lose, Emmie finds herself facing her biggest battle of all: How to cheat the path of history and keep her irresistible king, or lose him—and her heart—forever.

The elevator pitch for Emmie and the Tudor King is Doctor Who meets Outlander as it revolves around a modern day girl who finds herself back in the 16th century where she is embroiled in court intrigue, royal flirtations and thwarting an impending murder. This is a fun fast-paced YA historical novel that’s perfect wish fulfillment material for any reader who’s dreamed of a whirlwind romance with someone rich, powerful and fabulously attractive! ⁣