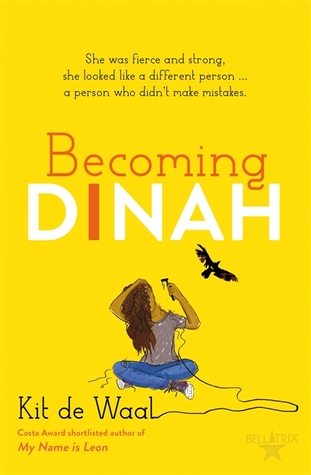 A YA coming-of-age road trip novel about obsession, self-discovery, female power, and the people we meet along the way – by Costa Award shortlisted author Kit de Waal. The perfect read for anyone who’s ever wondered where they came from and where they might be going next.

In her first YA novel, Costa-shortlisted Kit de Waal responds to classic Moby Dick by tearing the power away from obsessive Captain Ahab and giving it to a teenage girl.

Dinah’s whole world is upside down, dead things and angry men and cuts all over her head that are beginning to sting….

Seventeen-year-old Dinah needs to leave her home, the weird commune where she grew up. She needs a whole new identity, starting with how she looks, starting with shaving off her hair, her ‘crowning glory’. She has to do it quickly, because she has to go now.

Dinah was going to go alone and hitch a ride down south. Except, she ends up being persuaded to illegally drive a VW campervan for hundreds of miles, accompanied by a grumpy man with one leg. This wasn’t the plan.

In her first YA novel, Costa-shortlisted author Kit de Waal responds to the classic Moby Dick with entirely new characters, a VW campervan, and by tearing the power away from obsessive Captain Ahab and giving it to a teenage girl who’s determined to find a new life, far away from her unconventional upbringing.

‘Becoming Dinah‘ is the first in the Bellatrix collection of YA books recently launched by Hachette Children’s Group which is focused on bringing attention to a diverse range of women’s stories written by leading female voices. Kit de Waal reimagines the classic 1851 novel ‘Moby Dick‘ by Herman Melville via our present-day society with the male sailor Ishmael going from a minor player in Captain Ahab’s quest for revenge to a young woman important in her own right at the center of her coming-of-age story.

My knowledge of ‘Moby Dick‘ is limited entirely to a vague notion of an obsessive captain pursuing a white whale to the point of madness. Luckily, knowledge of the source material isn’t necessary in order to enjoy this book as it stands alone quite capably, but there are numerous references and more than likely in-jokes that only those familiar with the classic will recognize. The few twists on the original that I recognized were rather clever, for instance, Dinah and Ahab are in pursuit of a Volkswagen Campervan in Whale White (wink wink) which has been stolen with Ahab’s prosthetic leg inside.

The narration is solely from Dinah’s point of view, so it puzzled me to see the first several chapters numbered with Dinah’s name next to it as though indicating an upcoming change in narrator until I saw chapter 7 with the name Ishmael. As Dinah only adopts this name on her mad adventure with Ahab, the author uses this to distinguish between chapters that explore Dinah’s past leading up to the event that makes her feel she has no option but to run away from home, and chapters that focus on new developments in the road trip from hell. Sometimes with a split between past and present, the former may suffer for being less compelling as we want to keep reading about the main story arc without the constant flashbacks, but that isn’t the case here as the author cleverly weaves in some intrigue to keep us invested in the past. There is the mystery in what led to Dinah fleeing in the first place as well as what caused the commune she grew up in to fall apart; astute readers may be able to guess in advance what unfolded, but knowing what happened and reading about it are two entirely separate things.

‘The only season you can trust is the winter. Everything dies. You can rely on that.’

Ishmael feels the sadness oozing out of him and wants to tell him he’s wrong, but right now, after everything she’s done, maybe he’s right. Ishmael couldn’t wait to go to school, she thought it would change everything, that her life wouldn’t be so boring, that she would make friends and find her place in the world. But it didn’t turn out that way. You can’t trust your hopes and your dreams, you can’t trust anything. Sometimes the best thing is to run from your dreams, as far away as you can.

Dinah is an achingly believable and sympathetic protagonist who has been through more than her fair share of angst. Her childhood upbringing in a commune may not be relatable, but the heartbreak of family separation, losing a close friend who has outgrown you, trying to fit in at a new school and struggling to reconcile one’s sexual orientation are universal themes that many people will identify with. While the effects of living on the commune weren’t examined in great detail, seeing Dinah’s efforts to assimilate into the public school system after being isolated from the real world her whole life felt new and fresh in YA.

As a child and teenager, small events can take on an importance of earth-shattering importance and even if objectively, a situation wasn’t that big a deal and could be handwaved away, Dinah’s narration successfully convinces the reader of her belief that it IS of the utmost significance. Most of us probably wouldn’t resort to shaving their hair to deal with a moment of shock and panic, but it makes sense for Dinah as a method of forcing herself to leave her life behind and forge a new identity. Unfortunately for her, the commune’s shadowy past hangs over Dinah and the supporting characters, providing a tangled web of betrayal, deceit, love and loss to be untangled throughout the story.

‘The raven is a spirit animal, a guide. When she comes, she marks a moment, an important moment, and you must listen… The raven means rebirth. And she means release. A new beginning.’

As the title suggests, this story is about Dinah’s journey to accepting who she is, and the impromptu road trip with Ahab leads to encounters with people that either shed light on different aspects of her personality or encourage growth and healing so that she can move past the pain she’s been carrying. This is a powerful and moving opening entry in the Bellatrix range, and bodes well for the future books to come. While this is Kit de Waal’s first YA novel, it will hopefully not be the last!

Personal Rating: 4 out of 5 kitties recommend this book.

Disclaimer: Physical copy provided by publisher free for an unbiased review. All thoughts and opinions are my own.

QOTD: How much would you risk to save the ones you love? Would you tempt even the most dangerous fate?
QOTD: do you have any plans this weekend?
QOTD: what trilogies do you love?
QOTD: have you seen any movies at the cinema more than once?