OwlCrate is a monthly book subscription service that provides you with a newly released Young Adult novel plus other bookish extras, such as jewelry & accessories, bookmarks, stickers & prints, toys, etc. 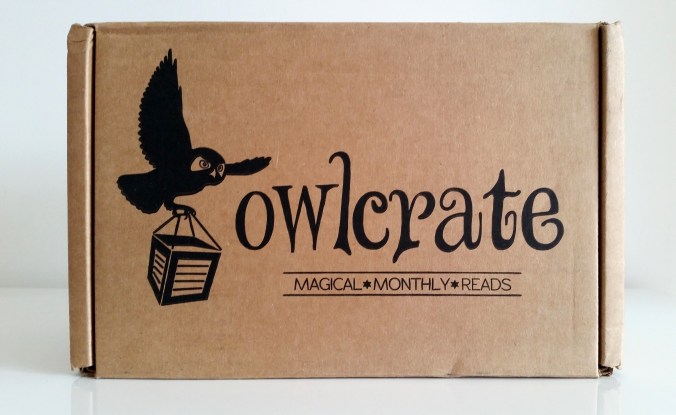 My box was dispatched on December 4th and arrived on the 19th – it was great that OwlCrate got organized earlier this month so that subscribers would have their boxes before Christmas! 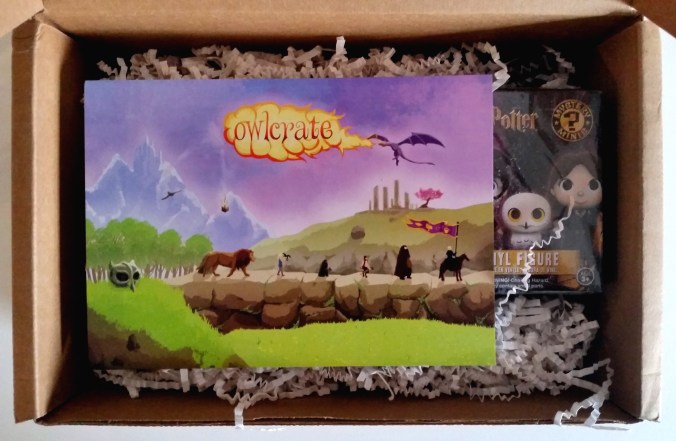 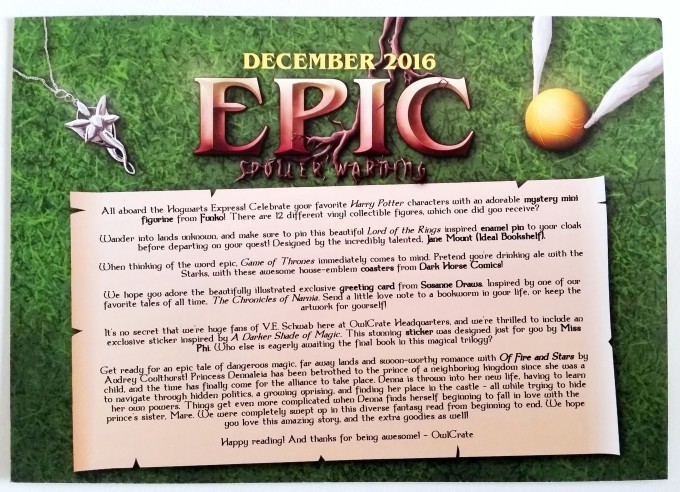 There is a contents card included that lists the items inside this month’s box. 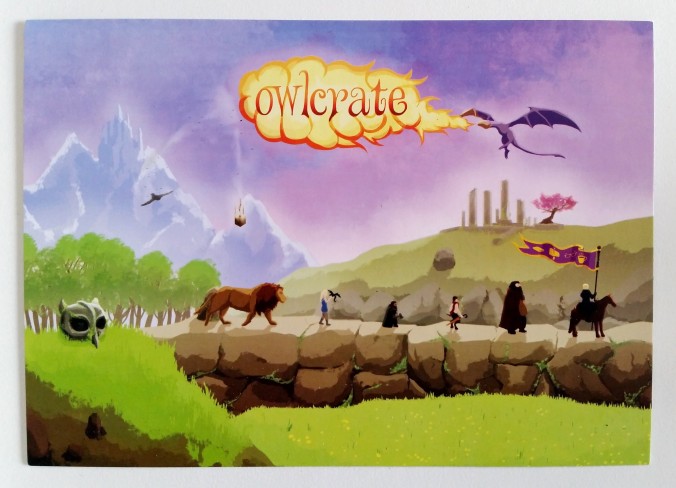 The reverse of the card features different characters from the fandoms related to the contents of the box. I spy Aslan from Narnia, Daenerys from Game of Thrones with a baby dragon, a dwarf from Lord of the Rings, Mr Tumnun the faun from Narnia again, Hagrid from Harry Potter and…not sure who’s on the horse flying the banner?

All righty, onto the items! 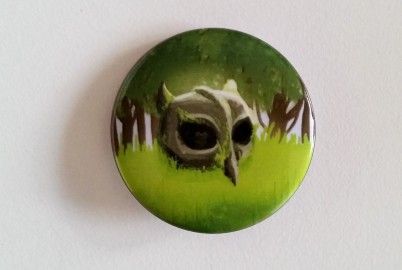 Pin: I’m not sure what the inspiration behind this pin is -I’ve looked at a few unboxings and nobody seems to have any idea, so it’s a bit of a mystery! 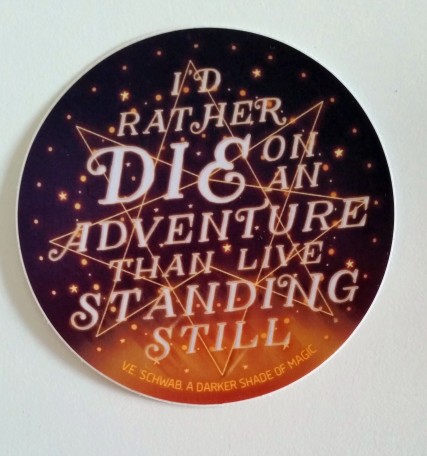 ‘A Darker Shade of Magic‘-inspired Sticker: interesting quote, but I’m not sure I agree with that, lol. Can’t there be a happy medium between dying and not living at all… 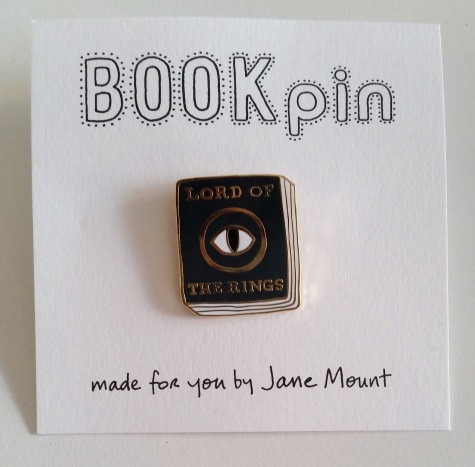 ‘Lord of the Rings‘-inspired Enamel Pin ($15.76 AUD): this spooky design is the Eye of Sauron. It’s a bit too creepy for me to wear as an accessory! :O 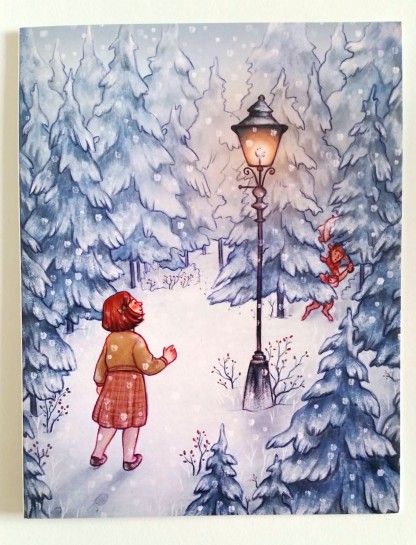 ‘The Chronicles of Narnia‘ Greeting Card ($4): now for something less morbid and more cheerful and rather Christmassy, we have a gorgeous card featuring Lucy’s entrance into Narnia and her first meeting with Mr Tumnus. 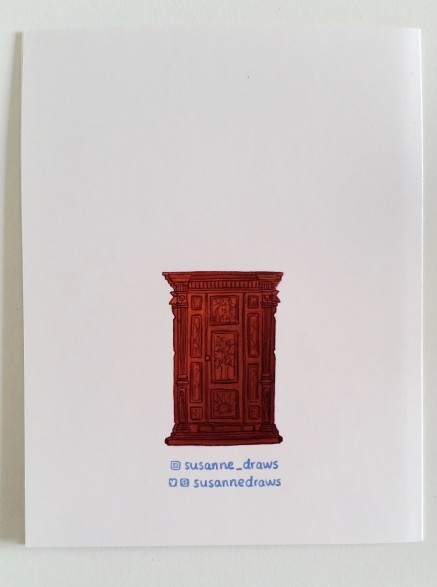 I like the detail on the back of the card, showing the magical wardrobe that granted the Pevensie children access into Narnia!

However, as lovely as this is, I’m disappointed that there isn’t an envelope included – from what I can see on the artist’s shop, she sells these cards with envelopes, so I don’t know why we didn’t receive one in the box. It renders the card a bit useless as people don’t generally give cards on their own, that just seems a bit odd. O.o 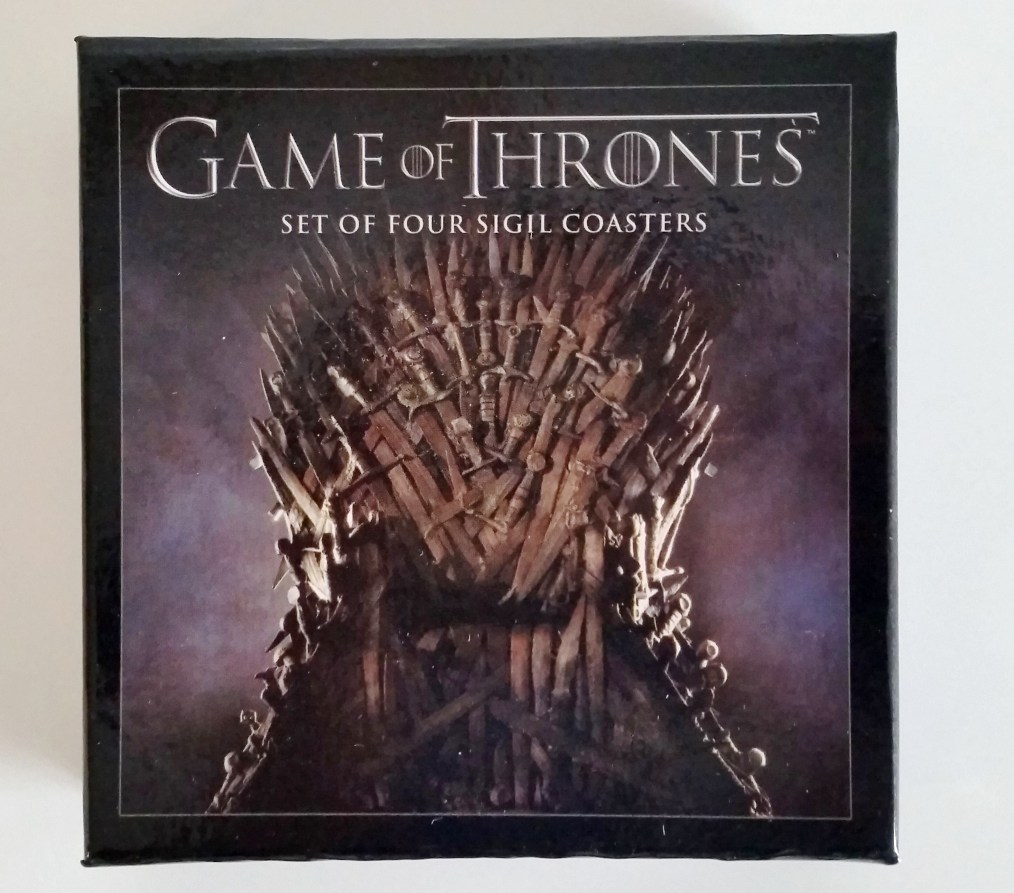 ‘Game of Thrones‘ House Emblem Coasters ($9.99 USD): we were told that officially licenced merchandise for GoT would be included – this is awesome, I love geeky items that have a practical use! My counter is going to be covered in place-mats and coasters soon, hehe. 😀 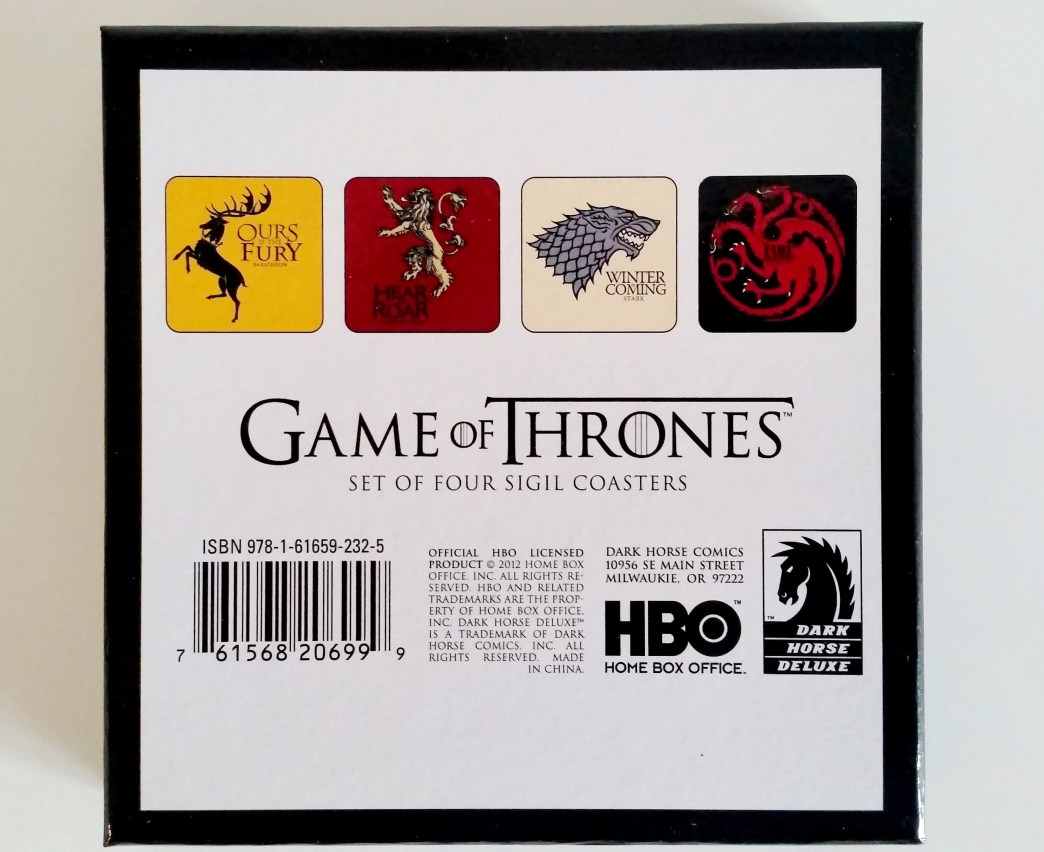 The back of the box shows the four designs featured on the coasters. 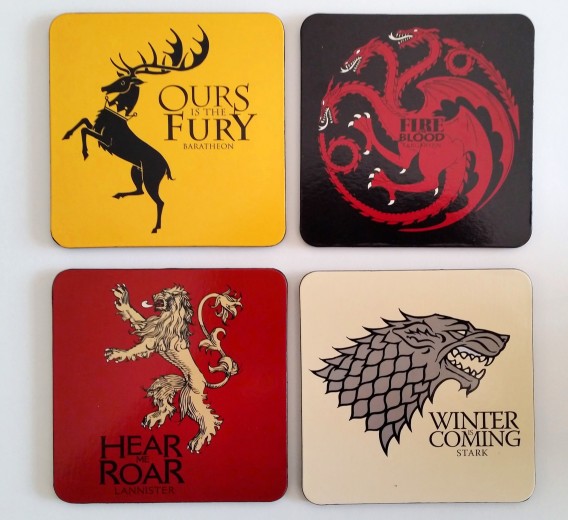 I haven’t gotten a chance to use these yet as I’ve been staying with my parents for the Christmas break, but just a warning that according to some reviews on Amazon, there are issues with cold drinks sticking to the coasters.

I might use these more as decoration for my kitchen bench if that’s the case! 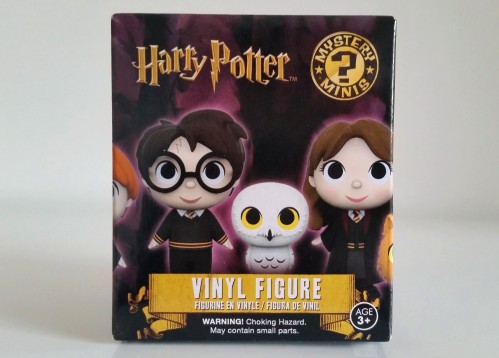 ‘Harry Potter‘ Funko Mystery Mini Vinyl Figure (between $7.95 – $9.99 AUD): I enjoy Funko figures, but I have a love/hate relationship with mystery minis… 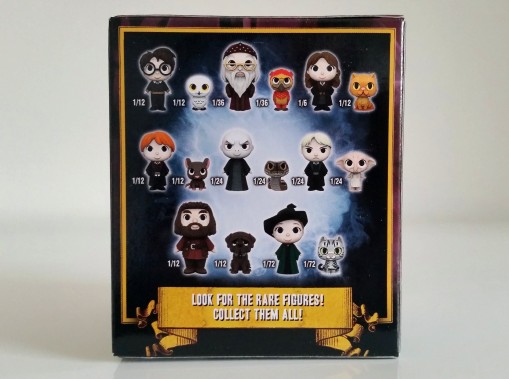 The back of the box shows all the possible characters you may receive – I always get my hopes up for a certain character and haven’t yet received the one I most want…for Harry Potter, I’d love to get Hermione or Crookshanks! The kitty version of McGonagall would be cute, too… 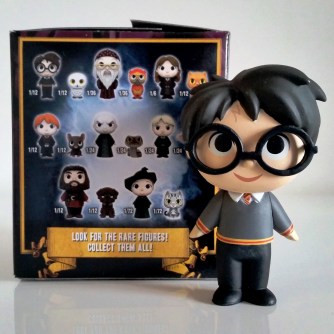 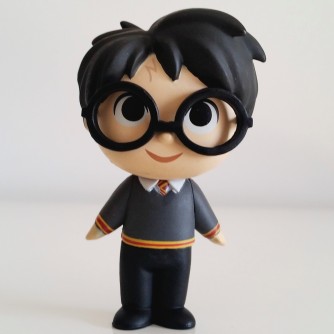 …and I got Harry himself – that’s cool! He’s not my favorite, but this is too damn cute. There’s a surprising amount of detail on this little figure, with Harry’s floppy hair, big round glasses, his signature lightning bolt scar and the red & gold Gryffindor colors on his tie and sweater. I’m a die-hard Funko Pop Vinyl fanatic, buuut I really love this as much if not more than some of my pops! 😀 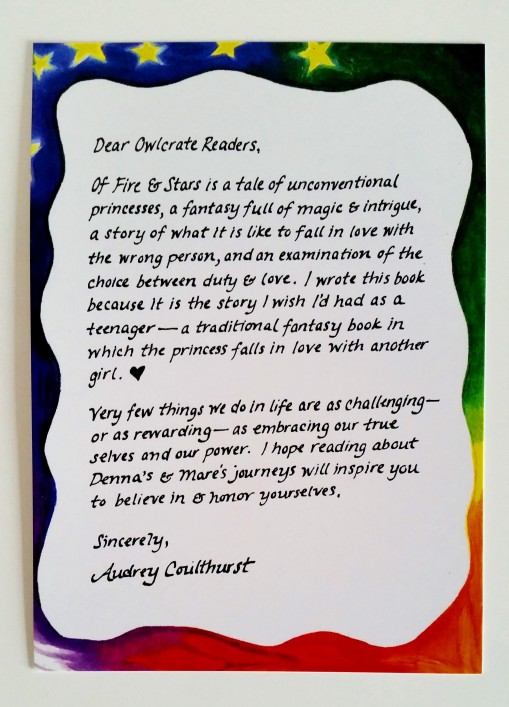 The book comes with a letter from the author – this is really sweet, I’ve yearned for YEARS for a tale about the princess falling for another girl instead of the same old ‘prince rescues girl’ fairytale, so I’m super excited about the OwlCrate pick for this month!

We also receive a tie-in bookmark. 🙂 I’d guessed that OwlCrate would pick this book based on the spoilers, and I’m so pleased that I turned out to be right! 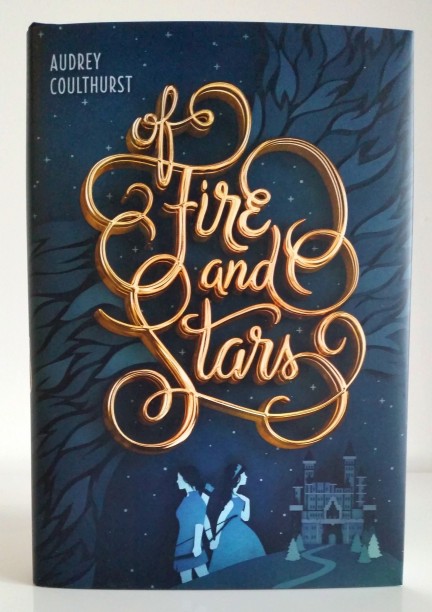 ‘Of Fire and Stars‘ by Audrey Coulthurst ($24.63 AUD) – synopsis from Goodreads:

Betrothed since childhood to the prince of Mynaria, Princess Dennaleia has always known what her future holds. Her marriage will seal the alliance between Mynaria and her homeland, protecting her people from other hostile lands. But Denna has a secret. She possesses an Affinity for fire—a dangerous gift for the future queen of a kingdom where magic is forbidden.

Now, Denna must learn the ways of her new home while trying to hide her growing magic. To make matters worse, she must learn to ride Mynaria’s formidable warhorses—and her teacher is the person who intimidates her most, the prickly and unconventional Princess Amaranthine—called Mare—the sister of her betrothed.

When a shocking assassination leaves the kingdom reeling, Mare and Denna reluctantly join forces to search for the culprit. As the two become closer, Mare is surprised by Denna’s intelligence and bravery, while Denna is drawn to Mare’s independent streak. And soon their friendship is threatening to blossom into something more.

But with dangerous conflict brewing that makes the alliance more important than ever, acting on their feelings could be deadly. Forced to choose between their duty and their hearts, Mare and Denna must find a way to save their kingdoms—and each other.

THIS SOUNDS AMAAAZING. There is a growing category of LGBT contemporary fiction that deals with coming out and other issues teens face in our society, but what we need more of is diversity in genres like sci-fi/fantasy. It’s great being able to escape into another world and leave behind all the trappings of our society and forget about the problems that plague us in the here & now, and I’m absolutely thrilled to have this book to delve into – ladies being badass and wielding magic and navigating tricky politics while falling in love is AWESOME. ❤ 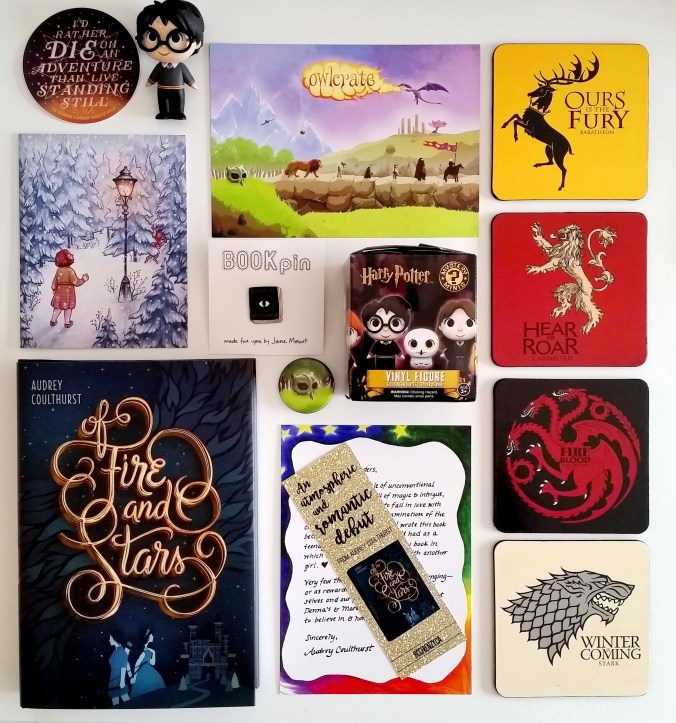 Quality of Curation: the theme this month was ‘epic’ and I didn’t really feel that running all the way through with this box. The pin, sticker and card were rather lackluster, in my opinion, those really are just filler items – it’s especially hard for me to get excited about pins and stickers, I never use them! Sometimes less is more – I believe a nifty magnet or piece of jewelry in their place would’ve been far better. But an item from Funko is always a highlight and the coasters were a cool inclusion. I’ve already fangirled over the book enough, you know where I stand on that! 😉

Worth It? I paid $65.45 AUD and all up, the value of the items is just under $70 AUD (or $50 USD), so I got my money’s worth which is not always guaranteed with international boxes, so that’s a plus. However, I wasn’t a fan of all the items included (which is always the gamble with a mystery box), so the value wasn’t there so much for me personally because of my tastes. This is definitely a safer bet for American subscribers who get a much higher value for what they paid! 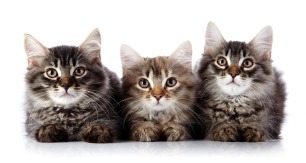 Disclaimer: Referral links above. I purchased this box, and this review is based on my personal opinion. No compensation was received.

QOTD: are you excited for the new season of Stranger Things?
QOTD: were you keen to go to parties as a kid?
QOTD: have you done any escape roons?
QOTD: what books have you most enjoyed so far this year?